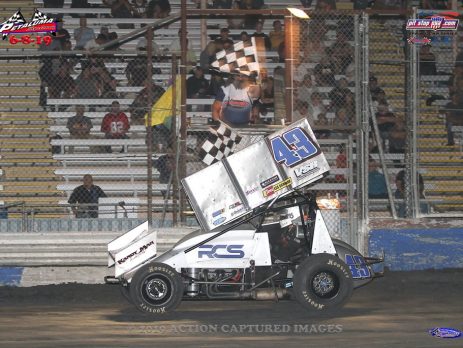 On a night where cars were scarce, Petaluma Speedway delivered the excitement and controversy over their four division program.

The main event proved the old adage “it’s better to be in second place getting to traffic” as Tjensvold looked to have his 4th main event win wrapped up but was held up by a lapper and Brown, always willing to pick up a spot or two, was Johnny on the Spot, swiping the lead and the win despite a furious Tjensvold rally late, coming up just a bumper short at the checkers. Darien Balestrini, rookie Bill Manzoni and Sophie Shelley rounded out the top 5.

The BCRA/Powri Midgets showed up with a 7 car mini-field and quickly, after the first heat race, Maria Cofer and Alex Schutte were shown to be the two dominant cars with Cofer winning an exciting heat race over Schutte.

Cars kept dropping out of the already small main event and before we knew it, the only two left standing were Schutte and Cofer, with Cofer trying everything to run down her foe to no avail. At the checkers Schutte was first, and Cofer finished second.

Early leader Colby Johnson was blazing fast and led the first two laps before a solo spin put him out of contention for the time being. Recent winner Brent Bjork took over the point, but former 3 time champion Bradley Terrell looked to have his measure. The BT Express could not find a way around the streaking Bjork until around lap 15, when Terrell finally found the key and smoked around the top of the bottom running Bjork coming out of turn 4. From there, Terrell was never challenged as early leader Johnson rallied from the back more than once and put on a show every lap, but had to settle for 4th behind Terrell, Bjork and Kirby. Defending champion Jake Haulot was fifth.

The largest group of the night, the Lumberjacks Restaurant Super Stocks, signed in 15 cars. Matt While would top qualifying, while Mitch Machado and While won heats.

While would lead the first ten laps until a yellow slowed the field. A double file restart proved negative for While as fifth starting Mitch Machado, on a historic run early on in the season, beat While into turn 1 and took a tight grip on the lead. On lap 23 of 25, controversy reared it’s head as Manny Avila made hard contact on Machado as Machado came by to lap him. More contact with While by Avila left the While entry stalled on the front stretch. Machado had to fight off a charging Paul Hanley, who turned out to be Shane Devolder over the last two laps and took his fourth checkered flag in as many tries, just three off of the Petaluma Speedway all-time record. In the infield post-race, emotions ran high and the always frank While promised retribution to those who wronged him while Machado wasn’t much happier despite the win. So goes Saturday Night Racing. Machado won over second place Devolder, who was disqualified after refusing post-race inspection, Shawn McCoy inherited the second spot over While, veteran Gary Adams, and fifth place Tim O’Hara.