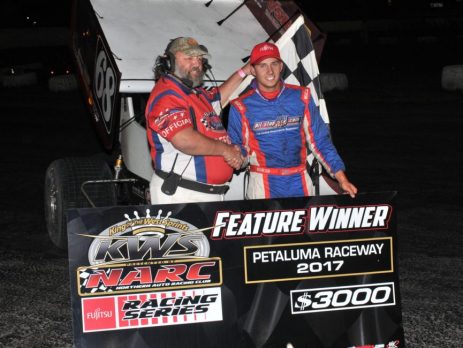 Johnson, piloting the potent Shawn & Cyndi Thomas-owned, Wesmar-Champion Machine-powered Maxim, played cat and mouse with polesitter Kaeding throughout the 30-lapper before capitalizing on slower traffic to make his winning move.  As the pair sliced and diced through lapped cars, Johnson launched a no holds barred slide job in the third corner on lap 16 to get under race long leader.  He exited the fourth turn with the point.

Kaeding wasn’t done yet and continued his frantic pursuit of the leader in a race that ran nonstop the final 21-laps after a couple of early caution flags.  Johnson almost took himself out of contention when he collided with the car of Nathan Rolfe going down the frontchute three laps later.  However, he regrouped and held on to the win by four car lengths.

“I knew I had a chance to get around Bud (Kaeding) if we got into traffic,” explained Johnson, after become the sixth different KWS-NARC winner this season before a hometown crowd.  “Once I got there and made it happen, I was surprised that it worked out so well.”

Eliason was on the move from the initial green after starting 11th.  He was seventh after nine circuits, fifth after 19 and ended up fourth in the Antaya Motorsports Fuel Curve-sponsored Maxim.  Tenth starter Scelzi, who failed to transfer out of his heat race in the Roth Motorsports KPC, secured fifth.

Scelzi still maintains a slim 467-466 advantage over Kaeding in the championship standings, after both drivers finished the event earning the same amount of points.