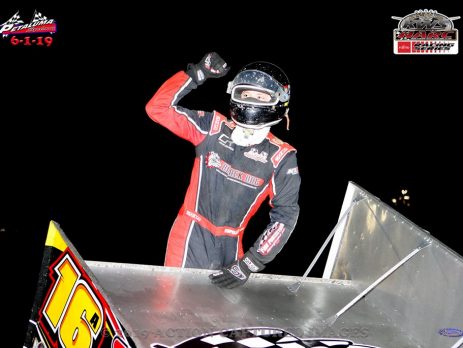 On Jake’s Performance Hobbies night, the Fujitsu King of the West Sprint Car Series invaded Petaluma Speedway, and fans were treated to four separate main events, three of which weren’t decided until the checkers flew.

The Jake’s Performance Hobbies Mini Stocks were the first main event of the evening. Turbo Terrific Totally Awesome Terrible Terrifying Tom Brown won the lone heat race. The main event started and The Norwegian Jackhammer, as opposed to the Swedish Jackhammer I guess, Jeremy Tjensvold took the lead almost immediately and ran away from all contenders until Brown mounted a late race rally and came within a car length and a half at the checkers to best the 7 car/truck main event field. Jason “Super” Grover of Sebastopol, an impressive rookie, finished third.

The main event was interrupted by multiple yellows, but the outcome was never in doubt as Martinez hotshoe Nick DeCarlo hit the front early and only increased his lead from there as he took main event laurels without much fanfare. Second at the checkers was Livermore’s Brian Cass, who came from deep in the field and third was multiple time track champion Gonnella.

The Redwood Dwarf Car Association presented by General Hydroponics continued to blow up the entry list with 26 cars and Darren Fridolfs, Marcus Hardina and Chad Matthias were heat race winners. The B Main was won by Ed Heeney, which set the A Main.

After the Scott Erwin green flag flew, the Dwarf Cars sorted themselves out and quickly, it came down to leader Mark Hanson, searching for his first ever main event victory, and challenger Marcus Hardina, sporting faster lap times, but unable to find the key to passing the leader Hanson. As the laps waned, Hardina took multiple shots at the leader Hanson, but Hanson would stay true to the bottom and dare Hardina to go around him on the top. Hardina could never solve the problem that was Hanson and at the checkers, it was Hanson besting Hardina for first place laurels with Matt Hagemann third, Chad Matthias fourth and John Peters fifth.

The marquee group of the night, the King of the West Sprint Cars, were paced by heat winners Willie Croft and former track champions Geoff Ensign and Chase Johnson.

Roseville’s Colby Copeland, the dash winner and pole sitter, took the lead early and hit lapped traffic first, usually a death knell for early leaders at Petaluma, however Copeland was flawless in traffic and kept second place Chase Johnson at bey as we went 26 laps without interruption until Fairfield’s Eli Deshaies got upside down on the frontstretch. Upon the restart, Copeland kept to the top side as Johnson kept the pressure on, and when we came to the checkers, a spinning Bud Kaeding kept us from finishing once again. The restart showed that Copeland was the dominant car as Johnson took another shot at the leader, but this time, Johnson ran into problems with DJ Netto of Hanford, as Netto’s slider would end up with both Johnson and Croft stalled on the backstretch. More laps were needed as Copeland again established superiority over new 2nd place car Netto and finally, after 33 laps were turned, Copeland was crowned king this night in front of a throng of cheering and appreciative fans with Netto and Ensign rounding out the podium spots.

Next week promises to be another great week of racing at Petaluma Speedway with the PitStopUSA 360s topping the bill along with the BCRA/Powri Midgets, Lumberjacks Restaurant Super Stocks, and Jakes Performance Hobbies Mini Stocks.