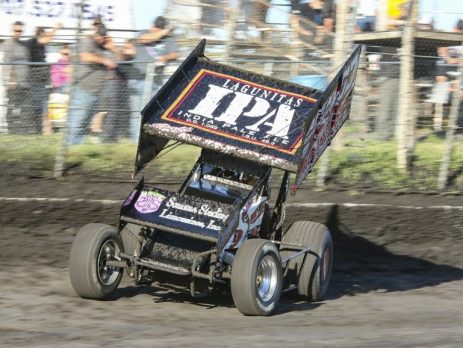 By Devin Mayo and Rick Faeth

A warm breeze brought Petaluma Speedway fans out to the hooked up and fast 3/8th’s this past Saturday on Jake’s Performance Hobbies Night for an action packed night of racing. The Pit Stop USA Winged 360’s saw “The Human Highlight Reel” Geoff Ensign from Sebastopol set fast time with a time of 13.202 over a field of fourteen. Heat races went to Dustin Golobic and Bradley Terrell. Visiting Peter Paulson and Ensign led the field to green however it would be the potent Afex Graphics – Lagunitas #63 that would rocket off of turn 2 to take the lead. Ensign would battle through heavy lapped traffic as Klint Simpson and Terrell would start to reel him in. Simpson and Terrell would make contact late in the race, causing a lap 22 restart. Ensign would pull away and win his second straight main event with Golobic in 2nd and Riley Matson in 3rd.

The Pit Stop USAC Spec Sprints fast timer was Joe Stornetta setting a time of 15.209 to best the seventeen car field. The heat races were swept by both of the fantastically fast females, Shayna Silvia and Angelique Bell. Terry Shank would lead the field to green. After a multiple yellow flag strewn event, Shank would pull away and never look back as he wired the field, leading all 20 laps, and taking the victory with Jake Haulot, who brilliantly wheeled brother Matthew’s car to 2nd in his non-wing racing debut. Bell rounded out the podium.

The General Hydroponic Dwarf cars saw Danny Wagner, Dave Mosier, and Travis Dutra pick up heat race victories. Wagner and Mosier would battle early in the main event until Mosier night would end when he would come to a stop in turn 4. Wagner was the man to beat until his motor would start to smoke heavily on the final lap and Toby Brown would pass Wagner on the final lap to claim the victory in dramatic fashion. Chad Matthias would finish 2nd and Dutra in 3rd.

The Lumberjack Restaurant Super Stocks saw Gary Adams and Mitch Machado claim the two heat races. A pile up on the start of the main event would put Machado on the point to lead the field back to green. Machado was strong out front but every restart, he would have to battle hard to hold off the field behind him. A late race restart would give Shawn McCoy and Matt While one last shot at the lead but Machado would prevail in the 25-lapper.