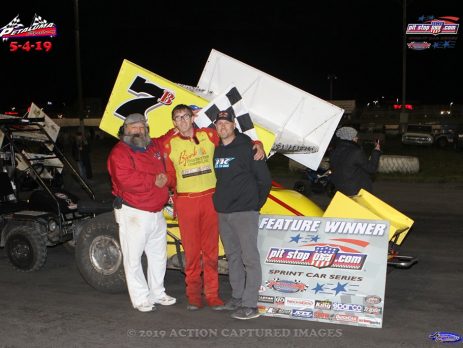 The 2019 season rolled on this 4th of May with a four division show. Both Pit Stop USA Sprint car divisions were on tap along with the Lumberjacks Restaurant Super Stocks and the Jake’s Performance Hobbies Mini Stocks.

The Winged 360s had a compact crew show up with just two heat races this night. They were won by Willows driver Angelo Cornet and Herald’s DJ Freitas. David Lindt paced qualifying with a 12.958 lap.

With temperatures dropping throughout the night, the main event started as the fans added layers. Freitas rocketed away early on with fellow heat race winner Cornet on the chase and visiting Brent Bjork third. Freitas, shaking down his new sprint car, bobbled in turn three and Bjork, who had eclipsed Cornet after the latter’s front wing went askew, took advantage and hit the front around lap 10. From there, Bjork would extend his lead to over 3 seconds at the checkers and become the latest first time winner at Petaluma Speedway followed to the line by Freitas, Windsor’s John Clark and Lindt.

The main event saw Fendley hit the front early and establish himself as the one to catch immediately. On the chase early were exciting rookie to the speedway Boy Moniz, Dennis Furia, Jr., Siverling, and Livermore’s Scott Chapeta all swapping spots while chasing after Fendley. Siverling would bow out early with engine problems and Moniz would surrender on lap 14 after a scary looking flip in turn 2. Furia would persevere, emerging in 2nd place and was dogged the rest of the way by Salinas’ Brian Grier. Fendley would drive off into the night as the winner, his first ever at the Petaluma 3/8ths followed by Furia and Grier.

The 25 lap main event resembled more destruction derby than race as racers took turns stalling, crashing and leaving and returning to the track almost every lap. Machado was leading during the times we were green, and Steve Studebaker emerged from the flames and smoke to run 2nd. The Machado/Studebaker showdown never materialized as, after 38 minutes and 21 laps, the checkers were thrown with Machado winning his second main event in as many tries in 2019 at Petaluma. Studebaker was scored second, Naron was third.

The Jake’s Performance Hobbies Mini Stocks keep evolving with new names and faces and this night had 9 cars (and trucks) in competition. Heats were won by “The Norwegian Jackhammer” Jeremy Tjensvold, and former Mini Stock champion Darien Balestrini.

The Mini Stocks proved to be a carbon copy of the previous Mini Stock race with the Bob Davis Power Pole Service Ford Pintos of Tjensvold and The Madman Tom Brown split by Rapid Roy Dearing in his own Pinto. Tjensvold would be unmatched at the front until the last lap where Brown found some speed and ended up on the rear bumper of the winner at the checkers. Tjensvold won his second race of the season over Brown, Dearing was third while impressive rookie Jason Grover of Sebastopol was fourth.

The 2019 season rolls on with the Pit Stop USA Winged and Wingless Sprint Cars, Lumberjacks Restaurant Super Stocks and the return of the Redwood Dwarf Car Association.